This page is about advertising WikiFur, as opposed to non-monetary promotion.

Promotion is usually very effective. However, there are some people who would be interested in WikiFur if they knew about it, but who can only be easily reached by paid advertising. The objective is to get the attention of these people while not spending money on those who will not be interested by WikiFur. Price is important, as WikiFur has very limited resources (currently whatever GreenReaper is willing to spend, plus other donations :-).

This page is for the description and maintenance of current campaigns, suggestions for their improvement, and ideas for new ones.

Past and future campaigns[edit] 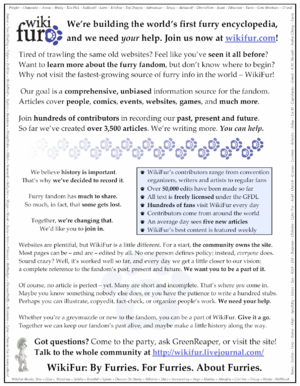 GreenReaper has taken out a half-page ad in the Megaplex 2006 con book. If you happen to be there and notice anyone being interested in it, please feel free to mention what a great site this is and why people should check it out. ;-)

Anthrocon is the premier east-coast furry convention. Furries will be attending from around the world. It may well be worth advertising at it.

Obviously, the AC2006 con book would have been be a nice place to advertise. Rates were not made available for a while, and unfortunately they didn't make it to GreenReaper before the deadline, so that idea didn't work out. Instead . . .

The backup plan was to have flyers distributed at the con - ideally, one to each attendee in the con bag. This worked out great, right up to the point of printing. Unfortunately, due to the incompetence of the printers and the gullibility of the person ordering expecting their turnaround time to be accurate, the flyers only left the printing shop the Friday before the con. They eventually arrived late on Thursday. The con staff did their best to add them to as many of the bags as they could from that point onwards. Many flyers (around 3000) were distributed at later conventions, most notably Further Confusion 2007.

One other idea being considered is to have some buttons that could be distributed (perhaps only to contributors?) at Anthrocon, and possibly at other conventions if popular and while supplies last. The most likely size is 1 3/4 inch, as that tends to be large enough in visibility terms but small enough to be economic. Buttons would have to be ordered in large numbers - over 100, probably more like 250 to get a reasonable rate.

There are various potential providers of buttons.

100 conbadge-attaching ribbons have been ordered for pickup at ConClave. They are intended to identify WikiFur editors and administrators to other con-goers, and spark discussion of the project. They will be used for at least MFF 2006 as well, since the number of furries at ConClave will be relatively small. The total cost was $29 (2 designs @ $2 + 100 ribbons @ 25¢).

Google offers a system of paid placement (AdWords) by the side of search results, and on affiliated websites (including WikiFur). Similarly, Yahoo! offers "sponsored search" results. These adverts cost money, though they are reasonable. Specific furry-related keywords (e.g. Anthrocon, as opposed to furry) are generally available for $0.10 a click, or sometimes less, and we can get far cheaper clicks via their "content network". Our average is about $0.03 a click. There is no charge for ad impressions that do not generate clicks, but those that fall below a certain click-through percentage have their minimum cost-per-click raised (and similarly, those that receive lots of clicks get a reduced rate).

Ads are restricted to a maximum of 25 letters for a title linked to a particular page, and 35 words each on two lines below it. All of them have an unlinked URL at the bottom, which is likely to be WikiFur.com for most ads. It is recommended that pages linked to be relevant to the ad and the search, and that the ad title or text contain the keywords specified. Note that it is possible to have multiple ads for the same keywords - the ones that perform best are automatically shown more.

Google also offer CPM ads, which are sold on the basis of impressions rather than clicks. As few people want to advertise on furry-specific sites, these are often available at the rate of $0.25/1000 impressions. Initial tests suggest a favourable rate of return for generic "furry fandom" messages; despite a significantly lower clickthrough rate, they cost less per click. Of course, people who click a specific search term are more likely to be interested in the content . . .

I have suspended advertising using Yahoo!, because Google offers consistently better value (mostly because Yahoo is not willing to reduce clicks below $0.10). Yahoo! gets a good clickthrough rate, but that doesn't help much if there's no discount for it and the clicks cost three times more than Google's.

Here are the stats over a three month period:

Yahoo! Search Marketing is also significantly less usable than Google's system, although this was not a factor in my decision to end coverage, just to start it in the first place. --GreenReaper(talk) 21:08, 19 August 2006 (UTC)

Note: Not all these ads may be visible for all selected keywords, depending on Google's current assessment of ad quality and the bid rate set for the advert.

Yes, I know . . . however this gets a depressingly large number of impressions and clicks. --GreenReaper(talk)

Got any thoughts on what keywords we should advertise under, and/or new ad text? Ideally we don't want to advertise where we are already in the top ad results - the whole point is to get people who wouldn't necessarily get to WikiFur to come visit. :-) --GreenReaper(talk)

How about fursuit and fursuiting?

I did consider fursuit. The trouble is our article on it isn't that good - it came from Wikipedia, and seems to have improved more there than it has here. Indeed, that's why I put it up for today's furpile! --GreenReaper(talk) 02:49, 20 February 2006 (UTC)

WikiFur's advertising has not gone without notice - both from sources close to home and somewhat further afield. :-)

Per a user suggestion, Greenreaper bid on several days worth of advertising at dieselsweeties.com using the Project Wonderful system R. Stevens is trying out there. The eCPM was <insert details here> 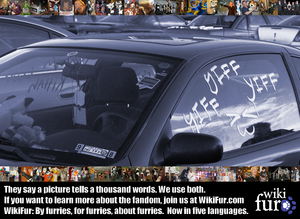 ConFuzzled kindly donated a 1/2 page slot in their conbook.

I've seen two seperate instances where someone has remarked that creating and editing articles is "addictive". I think advertisements based on the addictive nature of WikiFur might be helpful. --Dmuth

Of course, some of these may be offensive to people. Care should be used.

Or maybe have some advertements that make WikiFur appear "forbidden". For example:

Some of these are a little on the silly side, however.

Finally, we may want to consider poking a little fun at ourselves. For example:

Then maybe some strange ads:

We've got to be able to do something like Wikipedia's ads. Maybe something to appeal to the geeks in the fandom involving fursuits, plushies and/or computers? Or the PafCon (CSI) sign? We could use them to link to featured articles or to the front page. --GreenReaper(talk) 06:13, 7 Oct 2005 (UTC)

Inspired by HAP's radio ads. To be read by different people.

The following is a review and evaluation of various on-demand printing services that WikiFur might use to manufacture/distribute its products.

Wikia:User:Keitei helps to distribute materials and items for Uncyclopedia and other wikias - The IRC conversation regarding distribution of materials is located on WikiFur Talk:Advertising.

Yeah, yeah. I know. But before you decide this is vandalism or us playing some kind of prank, read the rest, ok?

Reasons Wikifur should advertise on ED:

If you didn't immediately dismiss the suggestion, we are selling space through Adbrite and if you enter the promo code ED at the checkout, it will give you the discount. Prices are pretty reasonable anyway.

OK, knowing ED, you probably are going "wtf, is this a setup?" and it's really not. ED has had a huge increase in users and traffic and we've been hit with some overage for bandwidth. We'd like to not see that come out of GirlVinyl's pocket.