Anthrocon 2006 took place from June 15 to 18, 2006 at the Westin Hotel and David L. Lawrence Convention Center in Pittsburgh, Pennsylvania. For the first time in its ten year history, Anthrocon was not held in July, but rather in June. The convention was moved from Philadelphia (where it was in 2005) to Pittsburgh.

The Fursuit Parade on the balcony over the Dealers Room 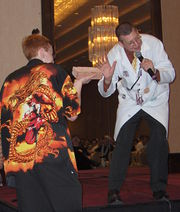 After the Adams Mark was scheduled for demolition, Anthrocon was forced to seek new accommodation on very short notice. While the Wyndham Philadelphia locale was adequate during the 2005 convention, it was determined even before July 2005 that a new location would be required. As Philadelphia was showing no signs of providing an affordable venue that was acceptable to the demands and budget of a large-scale convention on terms that the convention directors could accept, the decision was made to switch to the David L. Lawrence Convention Center in Pittsburgh, Pennsylvania.

The new facility, which features a separate hotel and convention space, appeared to alleviate most issues which had come up in the past conventions as well as provided enough space for a substantial Dealers Room, Artists Alley, and other 'permanent' programming space.

Anthrocon's Guests of Honor for 2006 were:

Waiting for the elevators is not quite so bad now...

While for the most part the fan reception of Anthrocon 2006 was very positive, there were some problems. 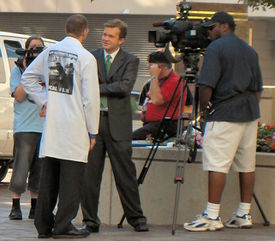 Media coverage of the event was quite positive

Anthrocon 2006 was covered in the local media, beginning in February with a news brief item Fur Ball In the Works in the Pittsburgh City Paper. Coverage tended towards neutral-to-positive.

Source: Anthrocon, Inc. Form 990 (description) from Foundation Center
Note: These financials provide just a brief overview, and should be considered in context. Each convention has its own situation, which may change from year to year. Special events (like art shows) that are part of a charity's mission are usually run at a loss. Conventions typically have many other expenses which may come to far more than those listed. Check the source for further details.