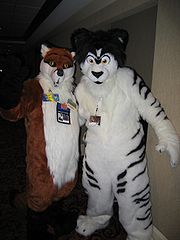 David von Foxkin and Byakko, fursuiters in the halls at Further Confusion 2007.

Further Confusion 2007 was the ninth annual Further Confusion, a furry convention. It was held from January 18 - 22, 2007, at the San Jose DoubleTree Hotel in San Jose, California, U.S.A.

Standard registration cost $50 at the door, while sponsors paid $100 and patrons $200. Part of each registration ($15, $50 and $100 respectively) was a tax-deductible donation to Anthropomorphic Arts and Education, Inc..

A total of $16,000 was donated to the two selected charities. $8,000 each went to Golden State Greyhounds and Stanislaus Wildlife Rehabilitation.

The convention events included a dealers' den, Iron Artist, dances, and a fursuit parade in which at least 287 fursuiters participated.[1] 137 panels covered various topics such as writing, furry spirituality, and fursuiting. The official convention charities were the Golden State Greyhound Adoption and the Stanislaus Wildlife Care Center. The art show sales and auctions amounted to $53,881.[2]

The finale of the Variety Show at Further Confusion 2007

Some of the fursuiters in the halls at Further Confusion 2007

The winners of the 2007 masquerade contest included:

Front cover of the conbook.

The conbook for Further Confusion 2007 is color thoroughout, 54 pages, with a front cover by Baron Engel and back cover by Smudge. It contains a message from the chair and vice-chair; the Code of Conduct; listings of staff, patrons and sponsors; description of the guests of honor and of events. It also includes three fiction pieces: "Morale" by Matthew Joseph Harrington, "Even Double Agents Need Days Off" by Renchan, and "The Crucible" by Kim Liu, illustrated by Dave Bryant. There is interior art by Baron Engel, Blue Tiger, Bill Fitts, Brian Reynolds, Daniel "Hoagiebot" Keller, Dook, DJ Mixer, Frank Gembeck, James L. Brandt, N, Shuik, Smudge, and Konrad.[4]

A change to cash basis accounting meant forthcoming FC2008 costs were not counted as a liability for this year. This altered the balance compared to last year.