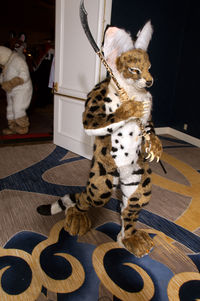 Spottacus Cheetah is an inventor, entrepreneur, physician, biophysicist, and incurable romantic when in human form, and a cheetah or other felid when in true furry form. Best known mononymously as Spottacus, or even just Spotti. He lives in the San Francisco Bay Area, and is not happy when forced to appear without ears, tail, or when asked not to purr, growl, hiss, bite, pounce, waggle, or lick (inevitably, that leads to some drama[1]).

Born on a smoggy day in Southern California, Spottacus has been anthro since birth, slinky in the 90s, and is now furry too. Amazingly, he crawled on all fours well before he learned to walk upright and pretend to be human. He deeply worried his parents by continuing to purr and hiss well after "normal human children" ceased such activities, but his parents grew to accept his furriness, and his mom, sister, and niece have come to watch him at furcon fursuit parades, and his mom even has invited him to accompany her to her parties.

Spottacus is frequently seen in animal form, usually as a large spotticat. He didn't grow fur until late in life, but passed the "how furry are you?" test with 100% positive answers before he was 12. Spottacus' household includes three true feline spotticats, one of which is an African Serval.

Spottacus' fursonas include the following: 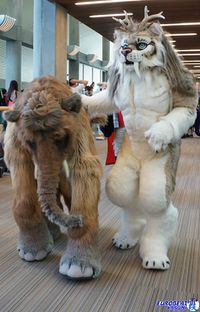 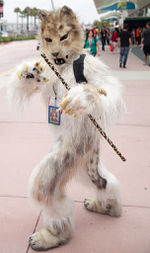 2012 Toofs the Sabertooth by Clockwork Creature at Comic Con 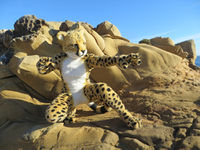 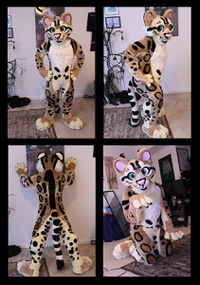 There are a number of minor characters, some unnamed, which include:

Fawxen by DHC having coffee

Spottacus is a physician/inventor. Founding his first company at 13, he has started a number of companies, with multiple products reaching the market in several fields, including by merger/acquisition and public offering. He integrates his anthro life into his real life, and both holds new hire job interviews even at furcons, as well as fursuits to the office. When mundanes (non-furs) describe him, the term "eccentric" probably comes the closest. Think of Tony Stark, but not as arrogant or obscenely wealthy.