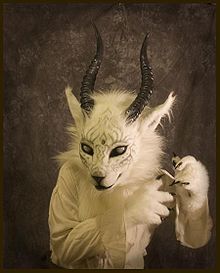 Qarrezel founded Clockwork Creature Studio in 2005, but did not start taking commissions until Winter of 2007. In 2008, she enlisted the help of her husband LaughingScarab to help with the growing business. They open for commissions seasonally, accepting a limited number of costumes.

Though her primary focus is in costumes, Qarrezel does maintain an illustration portfolio. Much of her illustration work is concept design for costumes, but she has done occasional private commissions and, in one case, a theatrical poster.

Qarrezel appeared at Anthrocon 2007, wearing her Garbonzo costume and her Jade Tiger partial. She also attended Anthrocon 2009 dressed as the Grey Witch and accompanied by LaughingScarab as the Iron Beast.