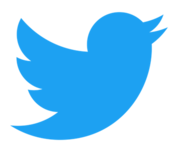 Twitter is a website which offers a social networking and microblogging service, enabling its users to send and read messages called tweets. Tweets are text-based posts of up to 280 characters (increased from 140 characters on November 7, 2017).[1]

Twitter was launched in 2006 and has gained popularity worldwide. It is estimated to have 330 million active monthly users,[2] generating 500 million tweets a day.[3] The Twitter mascot is a nonmorphic bluebird.

Twitter has become as popular with furries as it has with the wider online community. Conventions such as Anthrocon and ConFuzzled also use Twitter to their advantage by spreading convention information through a real-time and direct medium. It is a helpful tool for receiving real-time updates at conventions, such as contests, temporary sales, and where to find popular artists. Many furries take advantage of Twitter's privacy options, allowing them to share messages only with approved people.

Twitter features the use of tagging tweets with the number/pound symbol (#), known on Twitter as a hashtag. One popular trend has been for furries to use the tag #FursuitFriday to tweet photos of their fursuit every Friday.

On December 31st, 2018, Twitter user @fluffysmolcloud tweeted a screenshot of the Twitter Brand Guidelines that stated "Don't anthropomorphize the logo", along with an anthropomorphized drawing of the logo. [4][5] This Tweet became popularized with furry artists and #TweetFur began trending as more art was produced of the anthropomorphized logo and posted with the tag.