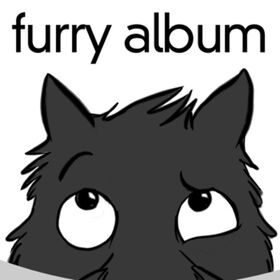 The Furry Album was created by Kurrel the Raven as his RPM Challenge album. It contains seven songs to do with furries, one poem and two short instrumental pieces. It was released to Fur Affinity on 25 February 2009, and was put up for sale on Kurrel's site in May of the same year.

The album was recorded entirely through microphones and instrument pickups, with Kurrel playing all of the instruments and doing all of the singing. No synthesisers or sequencers were used in the creation of any of the music, although many of the pieces feature significant amounts of sound treatment. Instruments included baritone ukulele, tenor ukulele, soprano ukulele, electric kazoo (Kazooka), Lincoln Chordmaster reed organ, melodica, glockenspiel, Tibetan singing bowl, guiro, maracas, shaker and the keyboard sounds of a Commodore 64 home computer.

Ya wanna know about furries, well I'll tell ya now

Furries are an Internet subculture Who are fans of anthropomorphic animal characters And they bring them to life in any way they can In costumes, illustration, roleplay and animation

The spaces we express and share our furriness Are on the Internet, that's where so many furries get Together in thousands in online communities Like Second Life, FurryMUCK or Fur Affinity

And we have real world conventions Like Anthrocon or Further Confusion In the Furry Autonomous Zone Alongside your own kind, ya know that you're not alone

When it comes to the details, we may disagree We're as diff'rent from each other as we can be In our interests, in our sexuality, You may have heard the myth but this is the reality:

There's all kinds of furries, no matter what you've heard, We all find our own place In the furry universe, For some furries their space Is kinky or perverse But it's not always that way 'Coz furries are diverse

We met in a fetish chatroom

I don't remember which one You were an otter, I was a bear We had lots of fun

We hit it off almost instantly Like tomato sauce and pizza crust Our turn-ons matched up so perfectly Yet it wasn't love, it was deeply kinky lust

We went deeper than we thought we could Amazed at the kinks that we'd find Sexed up text roleplay, all night and sometimes all day Ah, we were two of a kind

Before I knew it, we were on the floor doing it And that part I enjoyed It was when you started inflating a balloon in my arse That I got paranoid

It took a while before I opened my bedroom door And you were well prepared Dressed as an otter I found strangely familiar, Offering me a costume that looked just like my bear

The crotchless bear made me baffled and scared Moreso your collection of toys There was whipped cream, helium and nitrous oxide - You were obviously a naughty boy

I said it appeared you had the wrong idea Because that's not what I'm like You see, online it's perfectly fine But I'm not like this in real life

My shudders are instant Your design's non-existent Your glare is persistent Like a hungry wolf eyeing a sheep To be brutal, you give me the creeps

If only I had the talent to make you Exactly as in my mind's eye... If I'd any idea of the skill it would take to I'd never have bothered to try

Your bodysuit's baggy But that's not what nags me, It's how all the glue that I used Has turned to yellow crust Disgusting and not unlike pus

I dare not reveal you So now I conceal you Forgetting I left you there You'll slowly decline In a box with a sign In red marker saying simply "Beware!"

So now it is time To hide you away To put you behind me And that's where you'll stay There will be no photographs To show to my friends To give them a bellylaugh At just how horrendous you are Let's be honest, o' object of wrongness, we've gone much too far

You said okay, that's not a chore It's something you'd drawn lots before As long as there wasn't any gore

We made the deal, and so I sent Your fee, which came out of my rent My roomie made up the difference

I emailed you a reference sheet I'd commissioned My furry persona in many sexual positions And a naked turnaround to get you acquainted With all my special markings, from eartip to tailtip

It wasn't your best work you know For 200 dollars, I felt low But that's okay, I'll let it go

I gave it to my special fox At his reaction I was shocked He got so pissed, he didn't find it hot

Oh I only meant it to say I'd like it if he yiffed meItalic text He said that he would never ever forgive me I said if he'd done this for me, I'd be grateful I'd love him eternally, I sure wouldn't be hateful

He told me to take it down Before it got around But it was way too late You'd already upped it to FA And noted in the comment "This commission made me vomit But I really needed the money But this is the last piece of fap fodder you'll get from me I'm so tired of all of your s**t, I'm at the end of my tether Yeah, f**k all furries, I'm leaving the fandom forever!"

You know it doesn't seem right

I'd feel better if I could touch you If you were here with me I couldn't promise that I wouldn't crush you Our love's so strong, it hurts so much You must feel it too But what can we do?

Day after day I close my eyes And hope and dream of when we'll be together And night after night, I imagine what it'll be like When we're holding hands That single moment will feel like forever Then, eyes wide open, it's all in my imagination And the shock of reality knocks the calmness out of me And I'm holding back tears or crying with frustration Your voice is near But you're so far And dear to my heart

Maybe it's better not to dwell But it's impossible to think about you Without missing you as well I hope it's not too long to go, I guess only time will tell

In the air behind me is a tail

Long ago I wished I had a tail Wished it very much You may say where wishes were concerned I was out of touch But it was what I wanted deeply For silly whimsy, nothing creepy Through hours spent in contemplation Wistful with imagination My nervous system found a way to Grow a tail down there In the air

One day I should I wake up with a tail Grown in overnight I'll take some analgesics for the pain If I didn't sleep on it right Then sew some tailholes in my trousers Try my best to not get trapped in sliding doors that slyly close Or turn around too quickly, should I belt some unsuspecting person Lacking derrière Savoir-faire

Meditations on the human tail Lead me back to now Contemplating what this feeling means What to think about This strange sensation at the place My sacrum ends and turns into my all-too-human tailbone I guess I'll never really know Nor have more than this song to show Re: my tail right there in thin air

Every week I get two days free When I can go back to being me I tend to stay at home and read if it's rainy, Or practice playing my ukulele

My friends always tease me Whenever we go shopping, they always try to sneak Kangaroo meat in with my curry To make the checkout chick stare at me and worry