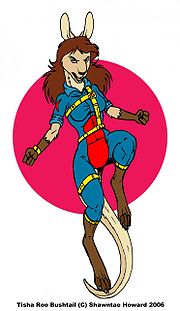 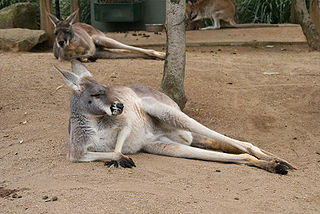 A Kangaroo lying down.

The Kangaroo is the largest surviving marsupial in the world. They are macropods like their smaller cousins the wallaby and the forest dwelling pademellon. Predominantly known as a native species to Australia, some species of Kangaroos are also found in New Guinea.

Being a marsupial, the females (Does) have a pouch which is used to hold their young from an early birth (approx. 4-6 weeks) through most of their young development. Kangaroos also feature a large muscular tail, used for balance, and a set of very powerful hind legs which can propel them at speeds of up to 70km/h over short distances.

In Australian common usage, male kangaroos may be referred to as "bucks," "boomers," or "jacks" and females "does," "flyers," or "jills." In the case of the Red Kangaroo, a female may also be referred to as a "blue flyer" due to their bluish-grey fur color in contrast to the ruddy coat of the males. The proper name for a group of kangaroos is a "mob." Young kangaroos are called "joeys."