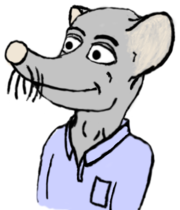 Many members of other rodent families, such as pouch rats and pack rats, are called "rats" due to similar appearance, but are not true rats and do not belong to the genus Rattus.[1]

The best-known rat species are the Black Rat (rattus rattus) and the Brown Rat (rattus norvegicus). Both are generally known as the Old World rats or true rats, and originated in Asia.[2]