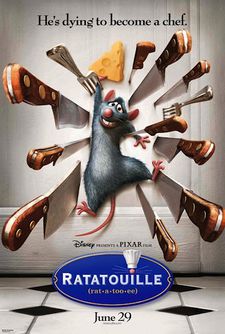 Ratatouille (pronounced rat'ah'too'ee), is a computer animated film by Pixar Animation Studios, released in 2007. The main character is a Parisian rat called Rémy. It was the winner of the 2007 Ursa Major Award for Best Anthropomorphic Motion Picture.

Rémy is a rat living in the French countryside, along with his large family. Often ridiculed by his family for his peculiar taste for fine foods, he was put to work, checking foods for poison, until his family, living in the roof of a small house, was discovered and forced to flee. Rémy becomes separated from his family in the sewers of Paris, clutching a cookbook written by the famous chef Gusteau, his inspiration, who claims that "Anyone can cook".

Much to his surprise, Rémy finds himself near Gusteau's restaurant, now handed down to the greedy chef Skinner. Rémy befriends the newly hired Alfredo Linguini, who has no cooking skill, but manages to achieve wonderful dishes by Rémy's direct manipulation. Linguini, who must hide Rémy's presence in the kitchen, is allowed to continue his job, under the constant paranoid watch of Skinner. As time goes on, Linguini falls in love with fellow chef Colette, which strains the relationship between him and Rémy.

When it is discovered that Linguini is the true heir to Gusteau's restaurant, Linguini takes control, firing Skinner. Rémy, who finds his family and treats a select few of them with food from the restaurant, is warned by his father to never trust humans. Sure enough, after a fight, Linguini and Rémy part ways. Angered, Rémy leads his family to the restaurant, where they raid the food stores. Linguini walks in on this, once again angered at the rat and his family.

The restaurant receives word that an influential food critic, Anton Ego, is planning to review Gusteau's, and Rémy decides to return to assist the desperate Linguini, who reveals to his fellow chefs that the rat was aiding him in his cooking. All the chefs leave, save for Colette, and, along with the help of Rémy's family, serve Ego a dish of Ratatouille, a traditional French stew. The critic, amazed by being served his favourite childhood food, demands to see the chef, and is impressed by Rémy's abilities. Ego, formerly a perfectionist, is changed by this revelation. Unfortunately, Skinner reveals the rat-infested restaurant to food inspectors, who shut down it down.

In the epilogue, it is revealed that Linguini opened a smaller restaurant named Ratatouille, where Rémy regularly, albeit secretly, assists in cooking, his family having a permanent home there. Anton Ego is a regular customer at the restaurant, now friends with both Linguini and Rémy.