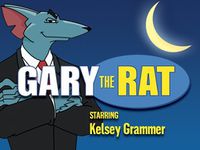 Gary The Rat is a web cartoon turned short-lived cartoon. It starred Kelsey Grammer as Gary Andrews, a lawyer who (literally) changed into a rat.

Gary The Rat started as a web cartoon (produced by eStudios & Grammnet) for MediaTrip.com. it was later bought by Mondo Media (aka Mondo Mini Shows) for syndication.

In 2003, Gary The Rat became the first web cartoon to be turned into a animated TV series, when it aired in 2003 on TNN (during the Spike Lee lawsuit over the "Spike TV" name change). Gary The Rat was cancelled after one season.

The show was awarded Best Anthropomorphic Dramatic Series by the Ursa Major Awards in that year.