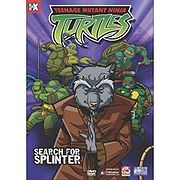 Splinter is the sensei master and father figure of the Teenage Mutant Ninja Turtles. According to an interview with Peter Laird, Splinter's character and name were based off the Marvel Comics' sensei Stick who trained Daredevil and Elektra. In all versions of the story, he is a anthropomorphic rat, but his origins often vary depending on the version of the tale told.

In the original comic (as well as the movies, 2003 animated series, and Fast Forward animated series), Splinter was the pet rat of a ninja named Hamato Yoshi. Exceptionally intelligent for his species, Splinter was able to learn his master's art by mimicking his movements while he practiced. Hamato Yoshi and his rat fled to New York to flee Oroku Saki (who would become the Shredder), but were tracked down and Yoshi was murdered. Without a home, Splinter eventually came to live in the city's sewers until a canister of radioactive ooze and a shattered bowl of four baby turtles entered his life. The ooze covered both the rat and the turtles and in time, the ooze mutated them into anthropomorphic beings. Splinter would then name the turtles after his favorite Renaissance artists and raised them as his own sons, training them in the arts of ninjutsu, so that they may one day avenge the death of Hamato Yoshi and slay the Shredder, who had amassed a powerful organization in the New York underworld.

In the 1987 cartoon and following Archie Comics, Splinter's origin was changed to where he was Hamato Yoshi. In hiding after a fall from grace at the hands of Oroku Saki (the Shredder), he found the turtles and kept them as pets, treating them as children. One day, he found them playing in a puddle of ooze. He picked them up and carried them home, but before long, found all of them transforming. The Turtles became anthropomorphic after absorbing Yoshi's human DNA and Yoshi became a rat because of all the rats he dwelt amongst for so long.