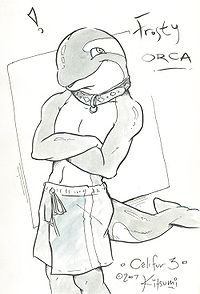 His fursona is an anthro Orca. He is a semi-albino: mixed splotchy gray and white, rather than the black and white of most Orcas.

Frosty is very involved in the furry world, staffing Califur and Further Confusion. He also helps with the annual Southern California Fur-B-Q and many other furry events in California.

Frosty is both an Electrician and a Theatrical Technician, having gone to school for both. He mainly works in construction, mostly doing electrical work, though he knows a lot of the other trades as well. He has often been called a "Jack of all trades" because he has working knowledge of a lot of different trades and enjoys doing lots of very varied things.

Frosty also runs a web server, which is currently hosting two sites. He is also a semi-professional photographer. His interest in photography is primarily a hobby, but he also does private photo-shoots.

Frosty is a regular at Sea World CA (SWC), going at least once every month, and often two or three times. He knows all the orcas at the park, especially Nakai, his favorite orca.

During Further Confusion 2010 after the Dead Dog Party, in which Frosty Orca was a staff member, a large amount of convention attendees including many fursuiters gathered on the public sidewalk and flowed onto the street. Frosty Orca cleared the street of the attendees. Controversy erupted when he then said to a convention attendee "I am staff. You want to come back next year? Get the fuck on the sidewalk."[1] He later apologized, saying he should have acted differently and made mistakes in his actions.