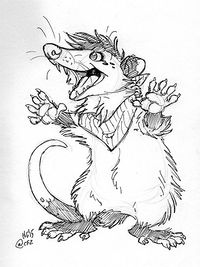 Neon as portrayed by the artist Henrieke

Neonpossum (born April 22,[1] 1986), previously known as Wingedwolf and Dogisdead is an opossum furry, furry lifestyler, fursuiter, and European wolf therian. He lives in Leicester, United Kingdom,[1] with his fiancée Pyropaws.

Neonpossum has a variety of characters which he uses to represent himself. His two main fursonas are:

Neon also has various other characters which he enjoys playing, which include:

Neonpossum has been producing artwork for the furry fandom since 2004. He is a regular attendee of ConFuzzled and has produced artwork for both that and NordicFuzzCon in Sweden. He is a member of various furry art websites, but his main gallery is at Fur Affinity.

In 2015, Neonpossum was invited to be a part of the prints marketplace InkedFur.