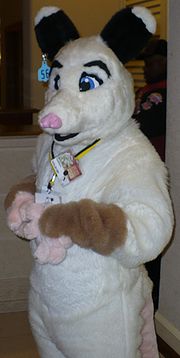 The opossum, or "possum", is a marsupial, either a member of the taxonomic family Didelphidae native to the Western hemisphere. They are often confused with the possums of Australia and nearby regions, which were named after the opossum due to their similarities.

The most well-known opossum is the Virginia opossum Didelphis virginiana of North America. They are known for having shaggy gray fur, humanlike forepaws, naked ears, long naked prehensile tail, and the marsupial pouch (in the case of the female) or the unusual bifurcated penis (in the case of the male).

The opossum has the dubious honor of being one of the best-known roadkill animals, due to the fact that they are nocturnal (drivers are less likely to notice them until too late) and that their first instinct when threatened is to faint and play dead (AKA "playing possum"). The ability to feign being dead is so authentic that they are even capable of emitting a smell reminiscent of rotting flesh to confuse predators into thinking they are actually dead and too rotten to be edible. This habit has led to a legendary folkloric treatment in popular artforms. Despite having a reputation for being vicious, they are actually very reluctant to bite or scratch, but, being masters of the bluff, they will instead hiss aggressively. Although they are often depicted in artwork as hanging from tree limbs by their tails, actual opossums are incapable of doing so; their tails are simply not strong enough. Picking up a live opossum by the tail is likely to cause injury.

Opossums were used as a cultural stereotype in a certain lesser-known WWII-era Looney Tunes cartoon, and one of Tex Avery's Barney Bear cartoons featured one, but other characters are far more recent. A couple of these include Thelma Possum from Nip and Tuck and Frye Opossum from Room For One More, both Southern belle types.