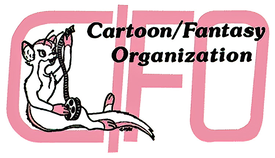 The Cartoon/Fantasy Organization (also known as C/FO) is a Los Angeles, California, USA club primarily involved in the discussion and enjoyment of Japanese animation which has held monthly meetings, usually on the third Saturday, from May 1977 to the present day.

Several of the founding members of the furry fandom are or were also C/FO members, notably Mark Merlino and Fred Patten, two of C/FO's own founders. The club's mascot Fanta is a furry character, specifically one of the first three Skiltaire created in the late 1970s by Merlino. The group was named by Judy Niver.[1]

Southern California furry fandom began in the Los Angeles chapter of C/FO in the early 1980s, as several of the members were more interested in what would later be called "furry" than the fantasy giant robots that dominated anime at the time. These proto-furries would hold improptu furmeets in the anteroom, swapping info on critters/comics/artists while the proto-otaku watched away in the screening room.

A New York chapter of the C/FO was also founded in 1980, by Joseph Ragus, Sr. and Jerry Beck. The east coast club's mascot was a different furry character, Anima. Created by Ken Sample, Anima was some sort of a "Fairy Skiltaire" with long antennae and butterfly wings.

In 1980, at the time the New York chapter started, it was believed that anime fandom could best be spread in America through a single club with chapters in many cities, coordinated via a single club fanzine through which members could share information and get each others' addresses to trade video tapes. The original C/FO group was renamed the "Los Angeles chapter." This worked well during the early 1980s, and the club had almost 500 members and three dozen chapters throughout the U.S. & Canada during its height, including a chapter in Japan at Misawa AF Base. Leading chapters besides Los Angeles and New York were in Chicago, Denver, Detroit, San Antonio, Cleveland, Atlanta, Richmond, and San Diego; most of which created their own cartoon mascot characters, though the majority of these were based on giant robots or anime girls rather than furry characters.

During the late 1980s, however, the club became split by "my chapter is better than your chapter" rivalry; and with the growth of the Internet, fans began leaving the club for instant net communication with other fans and to create their own websites with color graphics. The C/FO as an international club was disbanded in 1989. Most of the remaining chapters became independent anime clubs with new names, leaving the Los Angeles chapter to reclaim the name as "the" C/FO. It has remained a local Los Angeles anime club since then, with no connection to furry fandom except to move its meetings from third Saturdays to other Saturdays when necessary to avoid conflicts with major furry conventions which many C/FO members will attend.