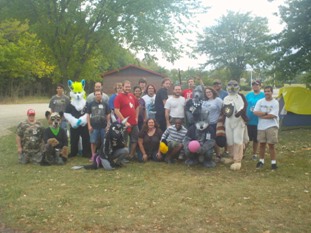 The first Central Midwest Furmeet was held on 11-12 September 2010 at Clinton Lake, Kansas campground Camp Bloomington West. It was conceptualized by Steel the Wolf and Riyeko. In May 2010 Riyeko posted on Fur Affinity "happy to announce that with Steels help and looking around, brainstorming and just basically getting to know each other, C.M.F. is going to take place this year in September, in a small place in Kansas."[1] Although Riyeko had to withdraw from the planning stage because of personal reasons, the event was still held. A grand total of 22 attendees were present.

CMF 2011 was held on September 9-11, 2011 at Bloomington West group park at Clinton Lake near Lawrence, Kansas. There were 33 total attendees present. Activities included Capture the Flag, Kickball, Foursquare, and a charity art raffle in addition to camp fires and meals. The charity art raffle raised $237 for Pet Connection, a no kill animal shelter, and featured pieces from artists Iggi, Danny Fang, and Solid Steel Productions.