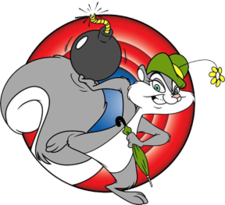 Slappy Squirrel is a cartoon character, originally from the animated TV series Animaniacs, voiced by Sherri Stoner and based loosely on Screwball Squirrel.

Slappy first appeared in the third episode of Animaniacs, supposedly as a former Looney Tunes character who has aged because everyone has forgotten her. Because of this, she complains about practically everything, showing only any affection for her young nephew, Skippy Squirrel.

However, despite her complaining and age, Slappy still retains the trigger-happy feeling found in cartoon violence of the 1930's, and uses traditional cartoon cliches like dynamite and anvils to further her jokes, with her sarcasm being her main vehicle of humour.

Slappy has had her fair share of villains on the show, but only a handful have appeared in more than one episode:

Although Slappy never spun off into her own series, she remains a popular character, and her now-defunct fan club on Yahoo! groups surpassed memberships for all Pinky and the Brain groups,[1] which was until recently the most popular characters on Animaniacs.