From WikiFur, the furry encyclopedia.
(Redirected from Bob Guthrie)
Jump to: navigation, search
Community > People > Bob M. Guthrie
{{LinkingSupporter}} is to be used on authorized pages only 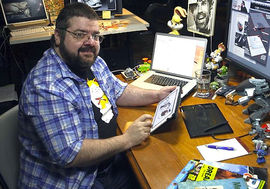 Bob M. Guthrie, or just Bob Guthrie, also known as Spirou on Wikifur, is an American born, European raised artist and animator whose funny animal art style has been a person of interest to the furry community since the early 1990s.

Bob M. Guthrie started an assistant cartoonist for several companies established in Barcelona, Spain, such as Editorial Bruguera. He served with the US Navy from 1985 to 1989 as an Anti-submarine warfare Gunner's Mate, stationed aboard the USS Gray (FF-1054), USS Claude V. Rickets (DDG-5), and USS Barney (DDG 6).[1]

Bob M. Guthrie has lived since 1992 at the Hotel Yorba household in Orange County, California, USA, along with artists Steve Martin and Doug Winger (until Winger's passing in 2015), he has attended some furry conventions and meets, and has contributed art to various funny animal media to several publications such as the The American Journal of Anthropomorphics issue 1 (pages 9-14) and issue 2 (pages 37-42).

A self-taught modern and classic arts illustrator, he works in various media fields in illustration, graphic designer, 3D design, cartooning and animation, with the last one in the sub-fields of animation character design and background artist. 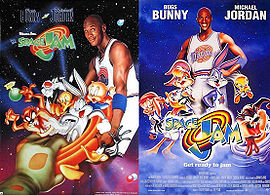 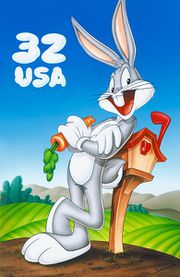 A former Warner Bros. Consumer Products and marketing artist, he has worked on several WB projects such as:

Other non-furry works include product and toy design and development for such companies as Mattel, Playmates, Jakks Pacific, and Spinmasters, among others, and character and prop design for several small and large animation studios.

{{Supporter}} is to be used on authorized pages only