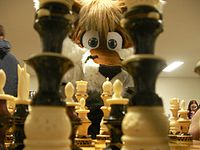 Shippou Softpaw is a fursuiter who lives in Georgia in the United States. He is the mate of Kaiya Softpaw and a member of the AirForce.

Shippou's fursona is a two-tailed kitsune. His fursuit was constructed by Don't Hug Cacti.[1]

Shippou enjoys many games, such as Diablo, Portal, Age of Empires, and Halo. He also enjoys non-computer games such as chess. He is a great competitor and would never decline any challenge.

Shippou is a somewhat shy individual. When he not found playing games, he can usually be found with his mate or other close friends.

Conventions that Shippou has been to include (but are not limited to) Oklacon 2007 and Furry Weekend Atlanta 2008.