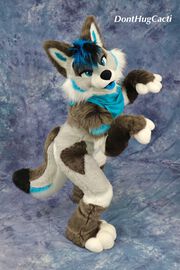 fursuit, designed and made by Don't Hug Cacti.

Don't Hug Cacti is a fursuit building business co-founded by Lucky Coyote and Skuff Coyote which debuted on April 23, 2007.[1]

On September 25th, 2020, furry artist Qutens tweeted a link to a published document ("Regarding Lucky Coyote AKA BlondeFoxy") of mostly anonymous testimonies from collaborators and ex-friends of Lucky Coyote,[2][3] alleging Lucky Coyote of emotional abuse, animal abuse/neglect, and zoophilia.

They further commented "Blondefoxy is not the owner of DHC" even though the state of Arizona would recognize her as an owner under local 'community property' law.[5].

By November 11th, 2020 Skuff Coyote had deleted the apology because:

On December 6th Skuff Coyote publicly tweeted at three of the individuals that signed their name in the document, asking them to have a live video chat with him on December 12th.[clarify] After receiving backlash from the general community, Skuff Coyote deleted his account, and an account with the same handle was created and was suspended for violating Twitter's Terms of Service.[7]

Qutens tweeted a link on February 5th[8] to their GoFundMe asking for $10,000 to pay for a lawyer to handle a Cease and Desist letter they had received on January 19th from Minc Firm representing DHC. Two hours later Don't Hug Cacti issued an update statement on the controversial situation on Twitter, stating that the company has been "under attack" by those impacted by earlier allegations and downplayed the allegations saying that they have been "embellished." The update ends with DHC announcing they "will be seeking legal recourse" and "exploring all of our legal avenues to address these attacks". The statement prompted a backlash against the company on Twitter, with the DHC post garnering over 1,400 quote retweets within 48 hours,[9] and Qutens' GoFundMe being funded within 24 hours[10]