Longinius (Ville Tanner, born June 17)[1] is a male furry artist from Finland. He is also active in the anime and My Little Pony: Friendship is Magic fandoms.

While Longinius does not have a fursona, he does have several personal characters. 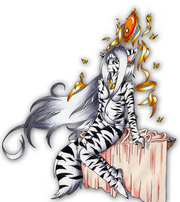 Aisha as drawn by Longinius

Aisha is a tigress born in India. She left her home due to oppression and disagreement with her parents and the general strict conditions in her home country. Regarding her family only her mother's name, Lhana[2], and her looks have been made public.

Aisha settled down in her new home and started a relationship with her mate Mei-Yun. 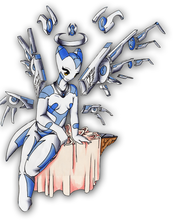 Mei-Yun, or Mei for short, is a female member of a yet-unnamed[when?] species[3] created by Longinius. She is the mate of Longinius' other character Aisha.

Mei was not named by Longinius himself but by his brother.[3]