FurBuy was an internet-based auction website primarily geared for selling furry items and items of interest to furry fans.

The scheduled panelists for FurBuy Auctions Meet & Greet at Further Confusion 2013, "people who are working hard to bring FurBuy to the furry community" were Jurann, Mordrul, G'razel and Skylos.[3] The panel did not run.[4]

Kaboukie became a "member of the FurBuy team" as "new web designer and all-around HTML5 guru" in January 2013.[5]

Xander Panther is listed as an administrator of FurBuy in 2013[6], "a Verification Specialist".[7]

In 2016, the statement "FurBuy Under New Management" on furbuy.com included "I would like to let you know that I'm the new manager of FurBuy and would like to introduce myself to you. I'm Miranda, aka Sparks Ravefolf, some of you may know me through social networks, some of you may also know me as an artist."[8] Sparks posted "I am Sparks, the community manager for FurBuy, as well as a furry artist." to the FurBuy LiveJournal community in February 2016.[9]

FurBuy was founded by Jurann in 1999, and as of 2009 ownership was transferred to Pan-Dimensional Marketplace, LLC which is a partnership-based limited liability corporation registered in Washington, United States.

The system was custom-made by Jurann and went live to the public on 1 December 2000. Prior to release, several months of research, development and beta-testing by actual artists was performed; the entire pre-launch process took approximately 10 months to complete.

On November 3, 2001, FurBuy announced in the News section of the website that "FurBuy will be closing permanently on December 1st, 2001", with "Thanks to everyone for an exciting 15-month project".[10] As of late June 2003, FurBuy had "re-opened as a free website and auction system".[11] Even though the system was no longer maintained and administrated, it remained online and operational during the period from December 4, 2001 through June 2003.

Initially FurBuy was based on a system that charged small fees for listing and closing auctions as well as enhanced features offered to sellers. After a couple of weeks of live service, it was decided that all fees would be dropped for use of the system due to a lack of users' desire to pay for such features. Since then the system has been completely free. FurBuy's features include image management/hosting, live auction status on foreign websites, co-branding capability and SMS/text-messaging. 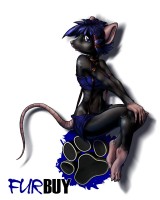 In 2007, K'sharra joined the FurBuy administration team and took over as Lead Admin. Shortly after, a completely revamped version of FurBuy's site layout was rolled out on July 2, 2007, including a new logo and various additional features[12] Since then, the site has undergone many improvements, several of which have been a direct result of user suggestions and feedback.

In November of 2007, FurBuy held a mascot contest (which was later separated into a mascot contest and a T-shirt design contest) which resulted in FurBuy's first mascot: Porter the Packrat[13] as designed by FurryVenus. As of 2008, the mascot had not been incorporated into the site design.

In June of 2009, what was formerly FurBuy became one portion of a new, larger partnership called Pan-Dimensional Marketplace, LLC (PanDimMar). The new company was formed in order to branch out the existing software and administrators into new genres and fandoms such as Renaissance/Medieval, Steampunk, Anime, Sci-Fi, Fantasy, World of Darkness and the like. At this time, K'sharra stepped down as FurBuy Community Lead in order to become the community lead for the new Merchants' Guild site under the PanDimMar flag. Jurann became the FurBuy Community Lead Pro-Tem at that time and is at this time still seeking a replacement community lead for the FurBuy site.

Flayrah has a related story:
FurBuy down for 'months' after spat with security researcher

Jurannn stated in a November 2011 post to the FurBuy community on LiveJournal that Mordrul was taking over management of FurBuy in "in his new role as Community Lead" and that Jurann would "go back to working on the software for the sites which the parent company Pan-Dimensional Marketplace operates, and making improvements which will be consumed by all of the member sites, including FurBuy and several new sites which will be opening soon. My role in FurBuy will slowly dwindle as Mordrul takes over those responsibilities and leads the site in a new direction with a fresh new face and attitude. [...] I will relegate most of the admin duties and leadership and marketing to our newest team member."[2]

In mid-2006 FurBuy announced its partnership with Fur Affinity and since then has been working with FurAffinity to develop crossover features.[14]

In May 2007, Jurann posted that FurBuy had "added the beginning of the FurAffinity linkages, allowing new and existing users both to set their FA username. [...] I'm also working with the folks at FA about getting linkages on their side setup".[15]

In July 2007, FurBuy announced the addition of a feature to "add your VCL username to your account", which "adds a little icon after your name that links back to your VCL gallery".[16] In an added comment on the same post, Jurann stated that the addition of VCL links "actually precedes a deeper VCL integration that we were able to discuss with Ch'marr at AnthroCon."[16]

In February 2008, FurBuy announced its partnership with FURiends to provide non-adult auction listings on their website. Along with this partnership came the ability to "add your FURiends name to your profile under your My Account - Prefs page and a pawprint will appear by your name."[17]

The record auction on FurBuy stands at US$4025.00 for a digital commission by seller Orange04 that closed successfully on Mar 6, 2008.[18] The successful completion of the sale was not confirmed by staff in 2008.

The previous confirmed record auction was US$3025.00 for a digital commission by seller Dark Nek0gami that closed successfully on Feb 23, 2008 and is confirmed by staff that the transaction completed smoothly between the buyer and seller.[19]

Annual sales records for the 2010 calendar year totaled just over US$247,000 while the 2011 calendar year showed a marked improvement with over US$335,000 in total sales volume. These values are not adjusted for actual prices paid by bidders, however, and may include sales which were never completed or reported as incomplete by sellers. These figures were posted both in the FurBuy LJ community and on it's official Twitter feed.

A FurBuy news post on April 8, 2009, titled "End of the Road for FurBuy?" stated "The primary financier of FurBuy for the last ten years can no longer afford to continue paying for the site out of their own pocket. FurBuy will officially close on May 15th, 2009 unless the funds can be generated to convert FurBuy into a self-supporting company able to generate the money necessary each month for full hosting. [...] If the $1,000 is not raised by April 30, 2009 (or very, very close to that amount with a clear indicator that more will be coming in May) we will be shutting down the system on May 15, 2009. This site was built by the community, for the community, and will now live or die based on community support."[20]

A "new page for the current FurBuy Support Project" was created the following day.[20] Options include support auctions and direct support (pledges).[21] Since then, donators and fans have been able to raise over $1,258 for FurBuy, saving the site from shutting down. Based on the success of the support project, FurBuy was able to convert the business from a sole proprietorship to a partnership-based company called Pan-Dimensional Marketplace, LLC. The funds raised also allowed for the purchase of newer rack-mount server hardware and installation into a dedicated co-location facility with much improved bandwidth and server stability.

FurBuy, along with other PanDimMar sites, now operates on a user contribution system. The monthly goals along with the current donation levels are now prominently posted at the top of every page on the FurBuy site. Users may contribute money in return for annual memberships or for ad banners to be rotated on the site of their choice. To date, no user contributions have achieved the goal of paying for 100% of the posted $400 monthly server fees, though it has come close. The difference is made up for by PanDimMar partners as out of pocket contributions to the company.

In January of 2016 DarkXander became aware of a SQL Injection exploit on the FurBuy website, which was able to be used to directly access MySQL data tables. The issue was promptly addressed by the site's coders once it was reported to them.[25][26][27][28][29] It was also revealed that the passwords to accounts were 2-way encrypted which is a potential for account theft and loss of confidential information by users of the site, which was also promptly corrected by the site's coding staff. [30]