SheezyArt, also known as Sheezy, is an online art site devoted to all types of media, including traditional, digital, photography, writing, pixel art, and animation. It originally operated from 2003 to 2013. It was revived by a former user in 2021 as Sheezy.Art, but the revival ended up being short-lived; the servers for the revived site will close in 2022, and its community will continue to live on as a Discord server.

SheezyArt's visual template is based on the same used at the DeviantArt art gallery, and as so, allowed user commentary on artwork, journals, and user pages. SheezyArt, like DeviantArt, offered a set forums in which the community could gather. 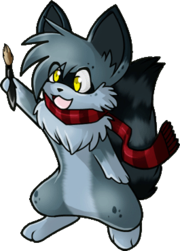 A SheezyArt club, The Bring Back Dante Club :), was created to preserve the memory of the former mascot.[6]