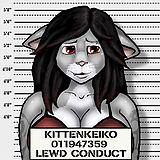 Self Portrait by Kittenkeiko (c) of character and art to artist.

Kittenkeiko is a transgender artist who draws both anthro and non-furry art. She is based in the north of England. She is known as a silver-furred were-cat who can be found in human, anthro and feral forms. The exact species of her animal form is that of the Panthera schaubi aka the Owen's Panther, an extinct northern European feline species that many believe to be the precursor of the cougar. When describing her species however, she generally will say cougar for ease.

Kit has been working as a semi-professional artist in some form for around sixteen years. Her early work was centred around comic book art, something that led to some published works. As her art matured it tended to lean more and more to anthro works using all manner of media. Her recent work is almost all digitally painted and often includes some kind of sexual or humourous content. She has been known to have some involvement in the transformation sub-scene. Her past involvement in the comic industry and her anthro art are now leading her to start on her own anthro comic tied into FurPleasure. As well as her drawing and painting, she is fully trained in film making. This has led to various video installation art works being publicly exhibited in the UK. Her character, in all 3 forms has been depicted by various artists such as Neolucky, Dior, Jesonite and Sukebepanda. (See External links)

Kit (under the shortened name of Kit Keiko) was more often than not found running the FurPleasure sims in Second Life. As one of the four founding members along side AOD Enigma, she had been with FP for many years. Shortly before AOD's passing she was given control of the FP Company, and shortly thereafter the sim itself was transferred into her name legally, following Foxdie Ghia's retirement. She is considered to have a "big sister" quality about her which was partly the reason why FurPleasure was said to feel more like a home than just another furry sim. Due to her shy nature she was also often working behind the scenes rather than in direct public view. She regularly DJs via shoutcast and was often heard within the club of FurPleasure amonsgst others, generally playing Electro and Punk. She is also a builder and texturer within Second Life and many of the builds within the FP sim cluster were created by her. Since the closure of FP , Kit still DJs in other clubs and can be found building for various theme sims.