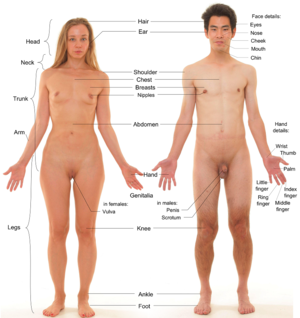 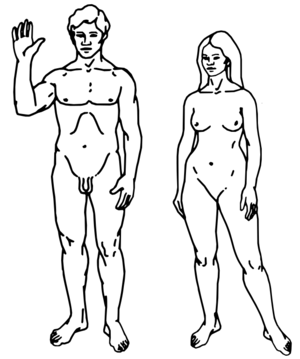 A human male and female, as seen on the Pioneer 11 plaque. 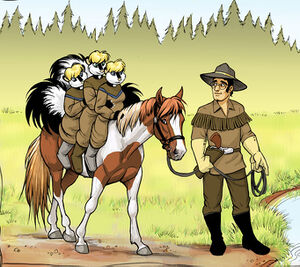 Furries and humans in world. Art by Dustmeat.

Humans (Homo sapiens), are one of the members of the family Hominidae, that also includes chimpanzees, gorillas and orangutans. They are the only existent member of the genus Homo.

Numbering somewhat more than seven billion beings, they are a ubiquitous species on the planet Earth. They are distinct from other primates in that they are bipedal, possess syntactic language, and make use of technology to modify the world around them.

Human beings are fairly common in stories (art, literature, film, etc) depicting anthropomorphic characters (furry media). In many, perhaps particularly in children's films, they cohabit with anthropomorphic characters and may or may not be aware of their presence or their intelligence. Indeed, recognition of this--and subsequent relationship between humans and furry elements--may be a plot point. In others, it is scarcely addressed.

Where the two are present concurrently and aware of the other, the relationship between them may be friendly or antagonistic. In some cases, there seems to be a little inherent problem; the universe of Gene Roddenberry's Star Trek acting as a prime illustration. In others, for example, Larry Niven's Ringworld, conflicts exist but are not bred from anything in the "difference" between man and "the other".

In others, however, the existence of this difference itself is a key motivation for antagonism, this kind of racism is called Fantastic Racism.[1] In some instances this is presented as an analog of the USA's civil rights movement, generally with the furry characters acting out the role of the oppressed minority. Personal relationships across species lines can be depicted as stigmatized, recalling beliefs about miscegenation.

In most stories, humans are or are seen as, the oppressors. Humanity definitely will show characteristics of Xenophobia, a fear of different life forms,[2] to one degree or another. In these stories or scenarios, humans are highly aggressive, preferring to destroy what they do not understand, or is different from them, than to use diplomatic or other peaceful means of resolving problems. Many, if not all, humans will seek to take advantage of everything and everyone. However this does not only apply to furry stories but to most stories were there are characters which are not human, like District 9 and James Cameron's Avatar.[3] If a story takes the point of view of animals or relatively weak or primitive non-humans, then humans are often seen as the perpetrators, antagonists, or simply, "savages".[4]

When humans also have ill intent for each other or are generally just bad people, it is a sad state of living.[5] Note that in some stories where there is a species superior to humans, this species might be physically stronger, more intelligent, of purer intent, and may also be able to transform, or mutate, humans into other species, or use hypnosis or mind control, which can lead to the human targeted to lose control of their actions and logic. This can be the cause of the humans becoming the oppressors in the first place and also raise questions about how the humans could defeat or enslave a most powerful race.[6] However the superior race can also became a Mary Suetopia.[7] It seems they are not above arrogance, though they or the author usually feel the need to rub their superiority in the face of the humans or the reader.[8]

In some instances, the existence of anthropomorphic characters is credited to human beings, as in Clifford Simak's City or a number of less well-known pieces of literature. There is a good motive for this kind of story, since humans are already inserting human DNA into animals, and even making they create human organs,[9] this also includes DNA of the human brain.[10] It is possible that humans will be able to create anthros in the future.[11] In this kind of fiction, this fact may enter into the details of the dynamic between the two, recalling to some degree the fascination of science fiction with robotics and artificial intelligence.

Of course, a number of stories lack humans entirely. Occasionally an explanation is presented for this that acknowledges the once or current existence of human beings, though more frequently the rules of the universe simply replace them outright with furry counterparts. This, as well, is a comparatively common setup in anthropomorphic literature and artwork; perhaps the dominant archetype.

While all members of the furry fandom simultaneously belong to the species Homo sapiens, this fact in and of itself seems to be occasionally a source of conflict: outside observers may notice a current of misanthropy running through some of the fandom, manifesting itself in ways subtle and otherwise. Additionally, a small but not necessarily insignificant percentage of furries appear to repudiate their ties to the human race entirely.

Furthermore, and somewhat intriguingly, the separation between furry and non-furry mentioned in the previous section--if not truly antagonistic--may not confine itself entirely to the world of art and the imagination. Online role-playing program Second Life supports a furry community that, according to an article in the Austin 360, practices a degree of self-imposed segregation between itself and "human" role-players.[12]

For some, there may also be a mental difference rather than an anatomical one, which, in some people's opinion, represents the difference between one sentient species and another. For them, it is a matter of mental texture in a thinking species that sets subspecies of human from one another, despite the physical similarities.