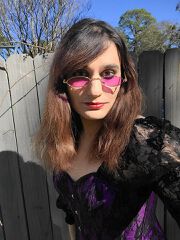 Naia Shiro Ōkami, or just Naia Ōkami (formerly Shiro Themian Ulv[1], born on June 18, 1994)[2] is a transgender therian who lives in Jacksonville, Florida, USA.[2] Her theriotypes are a black wolf and a red fox.[2]

From a young age, Ōkami felt that she was "not human" on the inside.[2] After watching the anime series Wolf's Rain at age twelve, she gained a fascination with wolves in general, and, as she read more about them and began to understand then, she began feeling as if she was "a wolf in a human body".[2]

Due to her young age, naivety, and complete admiration for "Kiba" from Wolf's Rain, Ōkami strongly believed she was an "arctic wolf in a human body".[2] She expressed this feelings to some of her friends, who either rejected the idea completely, or labeled it as "furry". Ōkami experienced "cameo dream-shifts and phantom-shifts into the form of an arctic wolf",[2] but, after further introspection, realized that she was a black wolf therian.

Ōkami was introduced to the Furry Fandom through Furcadia, where she became a volunteer staff member responsible for programming, software quality assurance, and providing final-tier technical support to users. She was formerly member of Jacksonville Furs and occasionally attends local conventions. She has hosted panels at Savannah Mega Comic Con, Savannah Animazing Con, and Sonocon focusing on the Furry Fandom and the Otherkin community.

Ōkami first entered the online therian community through the now-defunct WereNet. She "didn't find them to be the friendliest bunch",[2] and ended up migrating to Werelist where she eventually became a docent staff member. Eventually, Werelist began to remind her of the old WereNet, and became inactive. In October 2011, Ōkami founded the Wulf Howl otherkin community and, shortly after, resigned as staff on Werelist. In November 2014, Wulf Howl was closed due to unknown circumstances. Ōkami founded Kinmunity in December 2014. Ōkami founded Wolf Howl in 2019.

In April, 2013, Ōkami was featured on LogoTV's documentary "What?!: I think I'm an Animal[1]. In the opening sequence of this documentary, Ōkami is seen stating "On all levels except physical, I am a wolf" and then barking at the water. Ōkami later stated that she was unhappy with the turnout of this documentary, calling it a "mockumentary" and stating that many parts were cut, manipulated, and coached[3].

My Life As A Therian[edit]

In September, 2013, Ōkami was featured in Pacific Standard Magazine in a segment titled "My Life As A Therian"[4].

In September, 2016, Ōkami was featured on the MTV's webseries "Owning it" in a short called "Otherkins' Special"[5].

On October 7, 2019, Ōkami was featured on Anthony Padilla's YouTube channel in a video titled "I spent a day with OTHERKIN (People who aren’t entirely human)"[6].

On October 25, 2019, Ōkami was featured on iWonderTV's YouTube channel in a video titled "On All Levels Except Physical I Am A Wolf With Naia Okami"[7].

In April, 2013, Ōkami was filmed changing her name from "Matthew Joseph Schimmel" to "Shiro Themian Ulv"[1].

Coming out as a transgender woman[edit]

In June, 2017, Ōkami publicly came out as a transgender woman via her Facebook account.[8] and began using feminine pronouns.

On November 21, 2019, Ōkami announced via her website that she had legally updated her gender marker[9].

In December, 2019, Ōkami announced that she had began feminizing hormone replacement therapy[8].