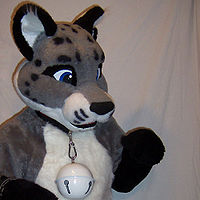 Josifer "Solus" Corraide (born October 24, 1981) is a furry artist and fursuiter located in northwest Arkansas, USA. His fursona is a snow leopard.

Solus' fursuit, Coral, is also a snow leopard. Coral's head was built by Ryngs Rakune in 2004, and the rest of the suit was contructed by Solus himself.[1] Coral often appears at furcons such at Mephit Furmeet or Midwest FurFest, and others when given the chance.[citation needed]

Some distinguishing features of Solus' fursona are the orange ribbon often worn on his tail and/or the left ear, and a black stripe that runs down lower half of his back and down the upper half of his tail.