The Mephit Furmeet, also known as MFM, is an annual furry convention in Olive Branch, Mississippi, USA, which is just south of Memphis, TN. This convention meets over the Labor Day holiday weekend. MFM's mascot is a skunk, as the name implies, and its motto is "Welcome home".

Mephit Fur Meet was originally hosted in Memphis, Tennessee. The event was first held at a Howard Johnson's Inn (now an Econo Lodge) on Sycamore View Road in East Memphis.

Tiger Haven has been the convention charity for Mephit Furmeet every year since 2001 and is expected to remain so for the foreseeable future. Through 2009, MFM has raised more than $100,000 for Tiger Haven and is their largest single contributor. More than $15,000 was raised for Tiger Haven at 2004. As of 2005, there is an enclosure bearing MFM's name that was funded entirely with donations from the convention attendees. 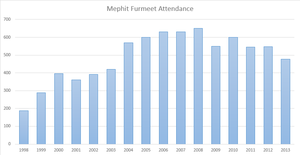 Scenes from Mephit Furmeet 4 in 2000 appeared in the documentary Fans and Freaks from Nashville, Tennessee area directors Stephen and Suzie Lackey.

In 2001, a surprise guest appearance was made by Dr. Samuel "Uncle Kage" Conway, disguised as "The Great Unknown Furry".

In 2005, the hotel was shared with displaced victims of Hurricane Katrina, with convention attendees donating both money and resources to those affected by the catastrophe.

There were over 600 people attending in 2005. Attendance held near that level through 2011.

Through 2014, an annual contest was held to select the t-shirt design. The T-shirt contest was discontinued in 2015.[2] Winners of the popular vote include: