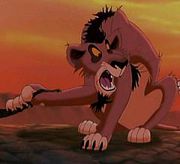 Nuka (Swahili for "smell" or "stink"; also Inuit for "younger brother") was the secondary antagonist of (The Lion King II: Simba's Pride). Nuka was an (Outsider) who was the eldest son of Zira, the stepson of Scar, and the older brother of Vitani and Kovu. His character was based off of Tybalt from Romeo and Juliet.

He was voiced by Andy Dick.

Nuka was very resentful of not being his stepfather's (Scar) chosen heir, especially towards Kovu. It was confirmed on a Facebook post by Darrell Rooney that Nuka despite popular belief and a quote from Flip Kobler, is not Scar's son. But due to the confirmed romantic relationship between Nuka's mother, Zira, and Scar, Nuka is Scar's stepson. Nuka was born during Scar's reign to Zira and an unknown lion, (the latter of which is unknown, as well as his fate being unknown in the slightest). Sometime later, Zira would have Nuka's siblings, Vitani and Kovu. After Zira and Scar's marriage, Nuka would become a part of the royal family of Pride Rock. However, he was passed up as Scar's successor to the throne in favor of his younger brother Kovu. This was likely due to Nuka's stupidity and unfitting of the role as Prince. Sometime after Scar's death, Simba, Scar's nephew, (who would also be Nuka's stepcousin and Nala being his stepcousin-in-law) banished Zira and her family to the Outlands, where Nuka spent the rest of his life.

Nuka simultaneously bashes Kovu and tries to please his mother, helping her out in her schemes to kill off Simba in The Lion King 2: Simba's Pride. This leads to his death when he chases Simba up an unstable dam of logs in an attempt to please his mother. Simba kicks off a log in Nuka's general direction, trapping Nuka and crushing him to death. There was a theory the in The Lion King book "A False Ancestor", we meet King Joe who looks a ton like Nuka, even his mane. This could mean that he was Zira's mate before Scar and is Nuka and Vitani's father.

His last words to Zira are "I'm sorry, Mother. I tried." In a cut version, he goes on to ask, "Well, I finally got your attention, didn't I? Didn't I?" However, in the final film, the second "Didn't I?" can be heard in a gasp before he dies.