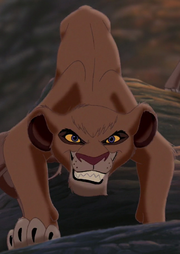 Vitani is the (former) tertiary antagonist of The Lion King II: Simba's Pride. She is the daughter of Zira, the stepdaughter of Scar and the younger sister of Nuka, the older sister to Kovu, and the sister-in-law of Kion and Kiara. Her original name was Shetani, which is Swahili for "demon".

Vitani's father is unknown, although Darrell Rooney, the director of Simba's Pride confirmed that it is not Scar. However, he might be Vitani's stepfather.

The character was voiced by a few different people in the English version: