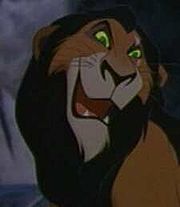 Scar (also known as Taka) is the main antagonist of The Lion King and a minor antagonist in The Lion King II: Simba's Pride. He was Simba's uncle, Zira's husband, Vitani's and Nuka's step-father, Kovu 's mentor and protege, Kiara and Kion's great-uncle, Mufasa's younger brother, and Sarabi's brother-in-law. Unlike his brother, Scar is small and thin, and his mane is black. There is a scar over his left eye which he got from a buffalo. He is voiced by Jeremy Irons in the English version of the movie.

In his youth which lead eventually into adolescence/young adulthood before Kion, Scar was tasked with leading the Lion Guard before Simba was born, and was given a power called the Roar of the Elders by the the Great Kings of the Past. When it was used he summoned the Great Kings of the Past, to roar along with him. However, that power went to Scar's head, and he believed that with this power he should be the king instead of Mufasa. So he planned to dethrone of Mufasa, by using the Roar of the Elders. But when the rest of the Lion Guard refused to help aid him in his plot, Scar destroyed them and thus lost his power as the Roar of the Elders was not meant to be used for evil. After many years of the Lion Guard's downfall, Scar focused his life on striving for his older brother's throne and continued to plot schemes with the hyenas to rule the Pride Lands.

Scar's jealousy of Mufasa carried over into his adulthood. During Mufasa's reign, Scar became an aloof pridal member whose presence seemed tolerated by most.

When Simba was born--quelling any chances of Scar gaining the throne--Scar's envy grew. He began to scheme ways of killing off his nephew and brother. It was Scar who tricked Simba into venturing to the Elephant Graveyard. There, Simba; his betrothed, Nala; and the majordomo, Zazu were almost killed by the hyenas Shenzi, Banzai, and Ed. They were rescued by the timely arrival of Mufasa, which angered Scar. Once Mufasa had taken the others out of the Elephant Graveyard, Scar went back, and with the hyenas, he discussed his plans to kill Mufasa and Simba both.

Not long after the incident at the Elephant Graveyard, Scar lured Simba into the Gorge by telling him that his father had a surprise for him. He left Simba at the bottom of the Gorge and snuck off to signal the hyenas, who were waiting with a wildebeest herd on the cliffs above. The hyenas forced the wildebeests into a stampede that charged into the Gorge, right towards Simba.

While Simba ran for his life, Scar returned to Pride Rock and told Mufasa that Simba was in danger. Mufasa rushed to his son's aid and succeeded in getting Simba out of the way of the herd, but when he tried to climb to safety himself, Scar intercepted him on the cliff face. Mufasa pleaded for his brother's help, but Scar instead flung him off the cliff. Mufasa was trampled to death by the wildebeest.

When Simba returned to the bottom of the Gorge and found the body of Mufasa, Scar guilted Simba into believing that he was responsible for the death of his father and urged him to run away. Simba did so, and Scar sent the hyenas after him. However, Simba managed to escape into a patch of thorns, and the hyenas left him for dead.

Scar returned to Pride Rock and delivered the news that Mufasa and Simba were both dead. With no other heirs in place, Scar was able to claim the throne.

Scar's first order of business as new king was to give the hyenas free range of the Pridelands. He also banned his brother's name because Scar did want anybody to know he was his brother's murderer.

Specific events during Scar's reign are sketchy at best. During this time, he married Zira, who was already a mother with 3 cubs.

Scar's rule lasted for quite a long time--up until Simba's ascension to adulthood. During that time, thanks to Scar's irresponsible management, the Pridelands became over-hunted and barren. The pride members began to voice their desire to follow the herds to greener, more prosperous areas, but Scar would not listen. Food became so scarce that even the hyenas--Scar's avid supporters--began to murmur against him.

During this time, Nala fled the pride. Some speculate that her reasons for leaving stemmed from a confrontation she had with Scar, in which Scar attempted to make her his queen. This idea is supported by The Lion King on Broadway show, in which Scar makes overtures towards Nala during the song The Madness of King Scar. However, when Nala explains her escape to Simba in the movie, she cites a desire to "find help" as her reason for leaving the pride. Likewise, in the canon film alone, she fled the Pride to leave help as implied.

When Shenzi, Banzai, and Ed complained to Scar about the lionesses not hunting, Scar demanded an explanation from Sarabi, whom he had demoted from queen to huntress. Sarabi tried to explain to him that the herds had moved and that the pride should leave Pride Rock, but again Scar refused. Enraged, Sarabi compared Scar to Mufasa, and Scar struck her across the face. In that moment, Simba appeared and confronted Scar. It was then that he learned the truth of Mufasa's death, and when the lionesses heard, they rallied around Simba. The hyenas backed Scar, and a battle ensued.

Simba chased Scar up to the pinnacle of Pride Rock, where Scar pleaded for his life, telling Simba that the hyenas were the ones who plotted Mufasa's death. After that, Simba says to him "Why should I believe you? Everything you ever told me was a lie". Simba agreed to spare Scar if he would "run away and never return". Scar said those same words to the younger Simba after murdering his brother years ago. However, Scar opted to attack Simba instead. In the struggle, Scar was flung off of Pride Rock. There, the hyenas--who had heard him try to slough the blame of Mufasa's death off on them--turned on Scar and killed him. Scar was also burned by the fire that surrounded the hyenas.

In the second movie, Simba's Pride, it is alleged that before his death, Scar's wife Zira, ruled the Pride Lands alongside him as Queen. Despite this, he had no children, despite Zira's 3 young cubs becoming Scar's step-children. Sometime before or after Scar and Zira's union, Scar adopted "hand-picked" Kovu--another one of Zira's offspring--as his heir before his death. In Simba's Pride, Nuka reveals that--despite a striking resemblance to Scar--Kovu is not Scar's real son. However, he is Scar's adopted son.

After Scar's death, Zira and some of her fellow lionesses were banished from the Pridelands by Simba. They became known as the Outlanders, and they remained loyal to Scar. This has raised some controversy, because in The Lion King, all the lionesses fought on Simba's side.

In Simba's Pride, Simba relives his father's death in a dream. In this dream, Simba finds Mufasa at the edge of a cliff. Simba reaches out to grab his paw but Scar appears and prevents him. Mufasa disappears into the stampede below. Simba looks up at Scar, and Scar grabs his paw. Scar then turns into Kovu, and throws Simba off the cliff. Simba wakes up before he hits the ground.

In the sequel, The Lion Guard: Return of the Roar Scar's great nephew, Kion takes Scar's former place as Leader of the Lion Guard. After hearing the story of Scar's demotion from Lion Guard leader, Kion vows to never be like Scar, which is a common recurring theme throughout the series.

In "The Lion Guard: The Rise of Scar", After Kion uses the Roar of the Elders in his anger, Kion summons the most greatest villain Scar being revived. With him summoned, Scar begins to get revenge on his nephew take over the Pride Lands defeat the new Lion Guard and overthrow Simba as the king. Meanwhile the Lion Guard begins to come face to face with Scar for the first time. As of Season 2, Kion vows to defeat Scar once and for all.