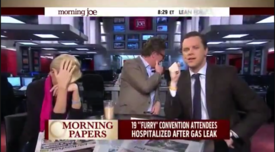 Brzezinski and Scarborough break out into laughter after the first news cutaway (showing the attendees, mostly in costume)

During a segment on Monday's "Morning Joe" show with hosts Joe Scarborough and Willie Geist, Brzezinski was reading a headline from the teleprompter about the Midwest FurFest 2014 chlorine gas attack.[1][2][3][4]

When she came across the unfamiliar term "furry" ("a person who dresses up in furry animal costumes to honor animals with human characteristics, according to ABC News), she slowed down awkwardly, and eventually paused to ask:

Willie Geist had to take over the segment as Brzezinski and Scarborough broke out into laughter. The segment ended with Brzezinski hastily running down a side hallway for the door after the second cutaway to the news footage of the story (which was an onsite interview with Anthrocon chairman Dr. Samuel Conway).[5]

Response from furries,[6][7] friends[8][9] and mainstream[10][11] were critical of the Mika Brzezinski's behavior during the reporting of the attack on the convention.