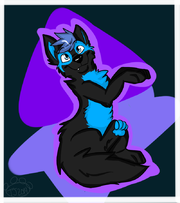 Kaiden RaveWulf (born May 1990) is a fursuiter living in Indianapolis, Indiana. Kaiden entered the furry fandom in December 2013 and created his first character, KaidenWolf.

Kaiden currently has plans to move to Wisconsin.

Kaiden's real life name is Michael. He currently lives in Indianapolis with his parents but has expressed interest in moving out for years. He just never had the means to do so. Michael attended Ball State University 2009 to 2013 and graduated cum laude (with honors) with a Bachelor of Science in Computer Technology and a Minor in Business Administration. He then attended Graduate School for a year for a Master of Science in IT and Business but had to drop out due to the stress of the 11 month accelerated master's program. Michael now holds a steady job in Information Technology, working as a contractor through a staffing firm, in Carmel, Indiana. Outside of the furry fandom Michael enjoys hobbies such as paintball, video games, technology, high performance gaming computers, jet skiing, and hanging out with friends.

Kaiden RaveWulf is a wolf, raver, and demon. His personality follows that of a renegade or bad cop personality. He does whats necessary for the good of all and he believes the ends justify the means.

Kaiden commissioned a fursuit to be made by Made Fur You. The suit was officially commissioned in February 2016. It was scheduled to be done in November 2016 however, due to financial circumstances, Kaiden has had to delay his suit until spring or summer of 2017.

The suit will be a full suit with digitigrade legs, and toony follow-me eyes. Kaiden is looking into getting the green patterns and purple mohawk to be UV reactive possibly by having MFY use a shade of fur that's naturally reactive. 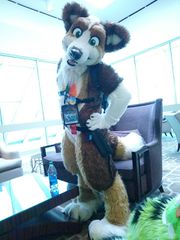 Kaiden's fursuit is his second character named Kody. This character is built around a premade Austrailian Shepard that Kaiden won in a FurBuy auction from Made Fur You. The suit was originally a commission done in Made Fur You's early days and was bought back, refurbished, and sold as a Full artistic freedom suit. Kaiden found the suit on FurBuy April 2014 and Won. This new suit and character, named Kody, would make his first appearance at Anthrocon 2014.

Over the 2 years Kody has been performing in the fandom, the character has acquired some extras. Kody currently wears a black harness with a bluetooth speaker attached, a blue FWA bandanna on his upper right arm, and a green FWA bandanna on his right thigh.