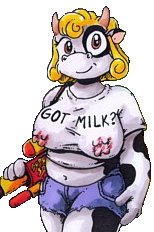 Betsie Blossum, aka Milk Maiden, is a female anthropomorphic cow (Holstein breed). Her first appearance was as a character on the original SuperMegaTopia muck, played by her creator. Originally, the character was created as more of a joke. But, since then the character has become rather popular with those that have encountered her, she has since spread to a number of other mucks, including the SMT Blue muck and Tapestries.

While her current situation may depend on where she's found at the time, her original history from the SMT muck is as follows. At the age of 10, Betsie's family was killed in a tragic fire at their country home. Afterwards, the young bovine was placed in an orphanage. During a field trip to the infamous SMT Labs, an attack by the local terrorist group ended up with Betsie being knocked into a vat of chemicals which were meant to be thrown out, as is customary at the labs. This lead to the young girl developing rather unusual powers. Since this wasn't a very uncommon occurrence for the labs, she decided to try being a super hero, but found that it really wasn't her calling, and has since been doing it only part-time. Now, around the age of 21, she lives a mostly quiet life in the city, running a small ice cream business for income.

As a result of her accident at the labs, she has developed a very curious power. Since cows are most associated with their milk, her's has the strange power of having almost magical effects on those that drink it, depending on what she last ate. For instance, if she had eaten marshmallows, her milk would cause someone to grow in size, while shortcake would result in someone shrinking. Most of these effects are the result of eating something sweet, though there's no real limit to the number of different effects foods could create in her milk.

Aside from this main power, the only other abilities she possesses are what one would expect from a bovine. Another fact is that depending on how recently she's milked herself, her bust changes size, often resulting in the plump cow needing to find a replacement shirt quickly.

Betsie, as drawn by Drake Fenwick

Weight: around 200 pounds or so

On Tapestries Muck, Betsie more or less appears as she does in SuperMegaTopia, except her life has taken a slightly different path. She has a grown daughter named Shelley, a half-cow/half-fox, the result of a short affair. She lives at home with her maid, Eponine, a cream-colored rabbit who she is in love with.

Bestie has also appeared in the game World of Warcraft. Here she is, of course, a female Tauren warrior. The WoW incarnation of Betsie has even appeared on the SMT Blue muck, the result of another accident at the labs resulting in the bodies of the two Betsies being switched.

Betsie, as drawn by Jamie Frye

Her two favorite characters from Crushed are Red Stephie and Purity.

Her two favorite characters from SuperMegaTopia are Delilah and SheMale.

The SuperSoaker she sometimes carries is loaded with milk rather than water.

There's a bit of a debate on weather she has hooves or feet. The official position is that she wears sneakers.

She is often known for having four nipples on each breast, rather than one nipple or an udder.

Favorite ice cream flavor is vanilla, since it goes with everything.

Her family is of Scottish descent, their name being changed from McBlossum by her great grandfather.

She was originally supposed to be a druid, but ended up being a warrior in WoW cause it was easier for her player.

Once bought a Warhammer Lizardman army online and ended up getting an army of real lizardmen by mistake, who all thought she was their high priestess.

She is noted as saying, "Cows are always under-rated. Never enough love for the moo moos."

Tends to get angry with people that make jokes about steaks, hamburgers, or how all cows are fat.