From WikiFur, the furry encyclopedia.
Jump to: navigation, search
Culture > Animation > Animations > There she is!! 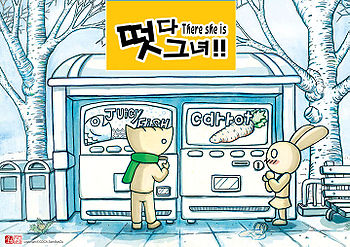 There she is!!, also known to some as Ddautta, is a popular flash-animation saga made by a team of three Korean flash artists who go by name of SamBakZa, and which is based on a Korean manga they made called One Day.

Amalloc has indicated that, once the complete series of five is finished, he hopes to produce for sale inline (online?) a DVD of all the works. There already exists a fan-produced DVD of the first two episodes (complete with subtitles), but this has not been publicly released due to copyright concerns.

On January 12th 2016, after HD versions of the original five episodes had been uploaded to YouTube, SamBakZa launched an Indiegogo campaign in order to help fund a new episode of There She Is. The new episode will primarily feature the Jijntta-set, the three scruffy bunnies, and will explore their origins and why they ultimately decided to help Doki and Nabi find their love. Its funding is ongoing.

In addition to being on the SamBakZa website, a version of the first animation with English titling was published in 2004 to high acclaim. This, along with the English-titled sequel, has given a much wider audience for SamBakZa in the western world where they now have a respectable fan base. Although the animations have no dialogue, and the characters names weren't disclosed until 2006, the webtoons are admired for their constant and well-played action, which gets laughs and "aw"s from its viewers.

"There she is!!" was nominated for both the Professional Award and the Cyber Jury Award at the Anima Mundi Web Festival in Rio de Janeiro, Brazil in 2004. It won both categories. [1]

There she is!! series[edit]