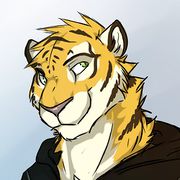 Ryan Blackpaw, also known as Ulbrek, is a fursuiter from Warsaw, Poland.[1] His fursona is an anthro Siberian tiger.[2]

Ryan discovered the furry fandom around the year 2001. His first recorded account was at Yiffstar, created in 2004. His first steps in the Polish furry fandom are linked to the Polfurs website, where he created an account in 2007. From the beginning his fursona was an anthro Siberian Tiger.

Among the first artist he stumbled upon were Gryf, Chris Sawyer, Kaa Bakensobek (then "Anthrosaur") and Goldenwolf.

The first person from the furry fandom he met was (then) the administrator of the Polfurs forum LV. The meeting took place on a fantasy themed convention in Warsaw, in 2004.

Involvement in the furry fandom[edit]

Ryan was one of the organizers of the Futrzakon convention in 2008 and 2009.[3] He also established the Polish version of WikiFur, and has been a moderator on Polfurs (the main Polish fandom website).[2]

Currently he runs the Warsaw Furries furmeets and organizes an annual fursuitwalk in Warsaw.