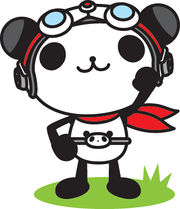 The PANDA-Z Universe was created by Shuichi Oshida in 1997 (or 1999) and it became popular pretty quickly. A Toy Line was introduced in 2004 from MegaHouse (Bandai's [Japan only] toy division) and the cartoon Robonimal PANDA-Z: The Robonimation was aired on Kids Station on April 12th, 2004 and ended on November 11th, 2004. Even though the anime ended, the series still airs on Kids Station in reruns.

Did you know? The anime is a collaboration between Shuichi Oshida and Go Nagai.

Panda-Z chronicles the misadventures of Pan Taron and his giant robot Panda-Z, as they battle the evil Skull Panda and his Warunimal forces.