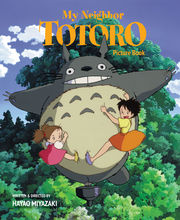 My Neighbor Totoro , released in 1988, is a Japanese animated film written and directed by Hayao Miyazaki and produced by Studio Ghibli. It tells the story of the two sisters, Satsuki and Mei, which together with their family moved to a rural town in Japan, and their day-to-day life including discovery of and interaction with the wood spirits.

They are the daughters of a professor named Tatsuo Kusakabe, he take care of they while their mother is in the hospital.