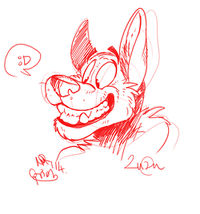 He joined the Hungarian furry community in November, 2013, with his life- and soul-mate, JazzBadger.

Zuzu's fursona is an anthropomorphic wolfroo (a hybrid of wolf and kangaroo). He is mainly colored blue, white, and black, with a white "Z-@" mark on his back. He has long kangaroo ears, a long kangaroo tail, wolf teeth, and big wolf paws.

Their first fursuit attendance together was at the Hungarian Mondocon in July, 2014.

Zuzu started a new fursuit-making project in December, 2015. The Felix Stripes fursuit was finished in July, 2016.[4]

He also attended the Budapets meet in Budapest in 2014.