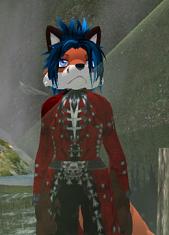 Zurui Kuramoto as he appears on Second Life.

Zurui's fursona a three tailed kitsune and shape-shifter. He can perform small magical acts aside from his fox fire ability; these acts include prestidigitation, flight, teleportation and small-scale conjuring.

Zurui can be found under the same name on Second Life, often found wandering around multiple furry sims including the Gay Yiffy Club and Rainbow Tiger. While he has a vast assortment of avatars, his normal is a three-tailed fox.

Zurui has been to every Anthrocon since 2005. In addition to Anthrocon, Zurui has attended the Western Pennsylvania Furry Weekend each year since 2004.