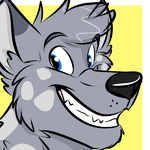 Zuki SudoWolf is a male Irish / Northern Irish wolf, software developer and doctor of physics, photographer, and one of the admin team of Irish furs. Commonly called GyakuZuki or simply Zuki and known by this generally online and amongst other furs.

Zuki joined the community in the early 2000s on UKFur.org although due to not being able to travel much beyond Northern Ireland, mainly kept this to online. Initially spending some time amongst the NI Furs, he began to chat in the Irish furs forums and chatrooms, made some connections amongst their number, and got involved in their meet planning committee in 2016.

Originally just calling himself Zuki, believing it to be sufficiently obscure, he found that to be the nickname of another popular fur, and thus often confused with Zuki (formerly Godzuki). As a result of this, he sometimes goes by the suffix SudoWolf; derived from the word pseudo and linux command sudo as a kind of double pun.

Zuki tends to take a lot of photos and can rarely be seen at major meets or events without a camera in hand!

Zuki is a grey wolf with some darker and lighter patches, and blue eyes.