Zorey or Dianne Burns (born June 1990) is an anthropomorphic and Furry art fan from Maine. The name Zorey has nothing to do with her, or anything of the other. Once a common sight on Furcadia, now mainly lingers on deviantART and/or Gaia Online.

She joined deviantART in 2004, and has had three names since her actual account. Zorey commonly commissions artists Lizspit and Roum. She refers to Roum as her best friend. 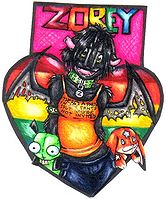 Zorey's fursona is half Skunk and half Dragon, an almost all black skunk, with two thick white stripes starting on either side of her short snout, and going to the end of her very large, poofy tail. Commonly wearing green, or carrying a GIR invader Zim stuffed animal. Early sightings or pictures of this character always had GIR in them. Now, a raver, brightly colored, and comic theme can be seen.