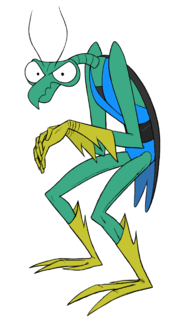 Zorak is a green-ish, anthropomorphic mantis who is the archenemy of the eponymous superhero, Space Ghost. His species is a Dokarian, a race of insectoid aliens resembling mantises. He was voiced by the late actors Don Messick and then C. Martin Croker.