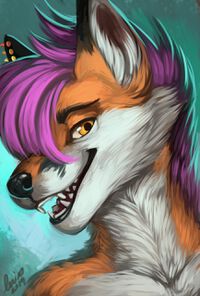 Zion Fox, often known as Zion, is a red fox who lives in England. He was born in the north west UK, and regularly attends Manchester, Northern, and occasionally London meets.

He's been a member of the furry fandom for over half of his life, joining officially in 2003. He started on IRC in various furry servers, and eventually moved over to Second Life under the name Zion Tristan in 2006. His specialty is computer programming.

Since his age of 17, he started attending the circle of NorthernFurs meets, in Liverpool, Leeds, York, Sheffield, Manchester and Newcastle for several years.

For most of Zion's time in the fandom he's been a typical red fox, with no special markings or anything to stand out, except for a set of gay pride ear studs in his right ear, and fairly wild dark brown hair. This was a design that he adopted from his Second Life avatar, which was his only real tool for defining his appearence.

This changed in mid 2018 when Zion redesigned himself. He remained the red fox as standard, keeping the singular white tip on his tail, but he made his forepaw gloves shorter, and added a band around his arms of the same colour, and has styled his hair in a purple wide-mohawk. Zion has also gained a few tattoos, on his right hip and lower back.

And plans to attend ConFuzzled 2020.