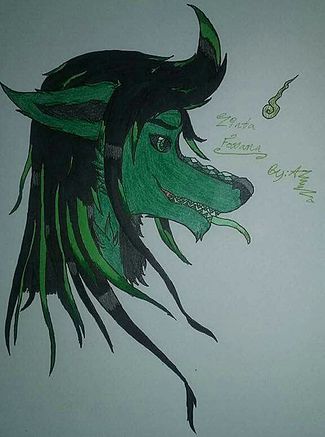 Zinta has a very strong passion for horror movies such as the Scream franchise The Grudge films, as well as Creepypastas. His favorite Creepypastas are, from one to three, Jeff The Killer, The Slit-Mouthed Woman, and Squidward's Suicide. The Silt-Mouthed Woman also foreshadows his interest surrounding the cereal Urban Legend of which was adapted into a 2007 film of the same name, which he also is captivated by.

Zinta has a YouTube Channel, named Zinta Foxana & The Painted Shadows, with 600 users subscribed, & over 200,000 total views.[4] His videos cover subjects including music, the furry fandom, & other horror themed content that he takes delight in.

He grew up loving The Lion King franchise as part of his influence to recruiting into the fandom, although strongly preferring the second film.

Zinta's specialty for drawing is more leaned to horror and the gothic, grunge scene.

Zinta's fursona is an original species which he termed as a Zemix, which resembles a humanistic snake, wolf, and sergal-like extraterrestrial creature; although Zinta clarifies further on FurAffinity to be more leaning towards reptilian-based. Starting from only a symbiotic-like embryo, Zinta The Emerald Zemix originated from his own spherically province; a planet named: The Emerald's Blood, while under a crudely deep borehole caused by the cracks of Emerald after the planet's formation. Pieces of emerald were dispersed as the gems, along with black ink raining from the planet's ravenous black atmosphere, embedded itself into Zinta, hence his final formation & color scheme. He has emerald green scales, with a mix of black and emerald green hair, and black eyes, with the cornea or iris surrounding the black slit-pupil having a dark greenish, gemstone-like appearance, leaving the sclera of his eyes black; the slit-pupil, being reminiscent to that of the eyes of the snake species. 3 dark green emerald gemstones also protrude from his nose region in a symmetrical fashion, just as his eyes are also foreshadowed in emerald. According to his FurAffinity, Zinta's internal neurons are also composed of the gooey black ink, & covered by the emerald particles that also make up his eyes & nose appearance. The black ink also substitutes for his blood but has a sweet delicate taste, making him self-vampiric, though he makes it clear that he is in no intention to consume the blood of other species.

Inspired by Gothic fashion, he wears a black shirt with shredded long sleeves, a black leather jacket, and black skinny jeans. He is also influenced into the YouTube scene by Goth YouTuber: It's Black Friday

He also enjoys the Gothic Subculture, as well as being a Goth, himself, to which goth internet star Black Friday also further influenced to continue pushing his interest into the culture, but with a more individuality-based perspective, which he greatly finds acceptance in.

His fursona's personality is a reflection of his human self, as he loves music, gothic makeup, horror movies, and has a strong passion for culinary arts, though self-proclaimed to also be slightly picky about what he eats.

As a musician, he has composed an original instrumental song untitled The Reflection Of A Stranger

Zinta's favorite musical hits that influenced his musical themes include Disturbia by Rihanna, Lights by Eliie Goulding, " The Hills by, The Weeknd and Sweet Dreams (Are Made Of This) By, Marilyn Manson. Similarly to It's Black Friday, Marilyn Manson became a big crucial part of his influence in goth culture but also the music scene as well; hearing firstly of Manson from a creepypasta video involving Manson.

Artists who have influenced Zinta's musical passion include Ellie Goulding, La Roux, Linkin Park, The Dixie Chicks, Rihanna, Lady Gaga, Katy Perry, Taylor Swift, and Marilyn Manson. In much later years, Gothic Glam-Rock & Heavy Metal Band: Black Veil Brides became a recent new influence to his musical style, with Zinta developing an interest to the band's drummer: Christian Coma. His interest in Coma was confirmed after seeing a YouTube video of Coma accepting an award for best drummer, while proceeding to give a speech, settling all love & hope for humans, whether it'd be of any sexual orientation or religion, given that music was a powerful source of comfort to Zinta.

Zinta also gravitates to certain country artists that including The Dixie Chicks, & also on rare occasions takes influence from songs of the K-Pop (Korean Pop) music genre with songs such as Lucifer by SHINee, Mr. Taxi by Girls' Generation, Don't Recall by, Kard (stylized as K.A.R.D.).