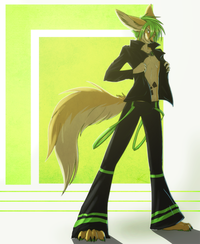 Also known by his DJ alias, Fennik, Ziggy has been interested in the fandom since, roughly, 2007. He did not create his fursona until two years later, in 2009. He started out on deviantART and branched from there, eventually leaving it behind.

Ziggy's fursona was originally a gray fox in 2009, but he could not connect with it very well, so he reconsidered it in 2010. Since then, has been a full-blooded fennec fox. His key physical appearance is a nuclear marking on his stomach, arrow marking on his left arm, his green hair, and his foot long green, pointed tongue.

Ziggy started dancing way before he experimented in DJing. His interest in EDM was sparked around the same time as his interest in the fandom in 2008. He was first introduced to Hardstyle, followed by other genres, including Electro House, Dubstep, Drum and Bass, and more.

Ziggy started to practice dancing soon after his interest in EDM in 2008. When he started with Hardstyle he discovered the Melbourne Shuffle and started from there. Within the same year he discovered, but didn't get as involved in, Jumpstyle, Tecktonik, and Glowsticking. In 2010 he ran across D'n'B Step and started to perfect it along with the Shuffle. As of recently he has been experimenting with Toprock and some freestyle of his own.

Ziggy did not pick up DJing as soon as he started dancing; he started to experiment with DJing around 2010/2011. He started off with Virtual DJ and began practicing timing and to crossfade. He began making an online radio that he named "Rad Radio".

Ziggy ended up getting a Traktor Kontrol S2 but later had to sell it. After saving up more money, he got a Vestax VCI 300 MK2 and used it for a good while. After undergoing a water incident with his mixer, he decided to take a break from DJing for a while and stuck with dancing, also going to shows to learn more before attempting again.

In 2013, Ziggy went back to DJing and got his radio back online, renaming it "Fennik Live". He has no mixers, but gets away with it just fine.