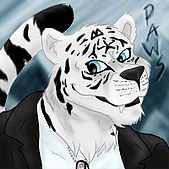 Zidane Paws, also known as Paws, is an anthropomorphic white tiger, who rarely appears as a feral. Paws' real name is Kell Webber (born 14th January 1991) from London. As of 2007, Webber is taking a gap year from college.

Paws grew up outside the city in a small village with his family and a small group of people. He trained Melee combat with the Master of the village Zukta. At the age of 12, Paws' village was attacked by a unknown group of people. Some of the villagers fled but most stood up against the group. Paws stood back and watched as everyone he knew was trying their best to save the village but was failing. In a outburst of rage, he picked up a sword and fought the invaders. However, at such a young age, Paws didn't have a chance against them and was badly wounded from it, forcing him to flee to a local city where, on arrival, he passed out on the sidewalk from his wounds. Paws awoke in a hospital 3 years later from the resulting coma and has lived in London since then.

Paws has managed to get along by stealing and hunting rare jewels then selling them on the black market. He has a dark, deep side to him which wants to find out what happened to his family and friends back at the village but he dont get worked up about it, but all in all he is and friendly and good around other people.