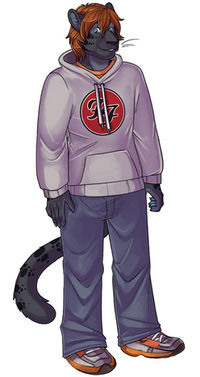 Zhed (zed) is a melanistic jaguar who lives in western New York. He has been in the fandom since 2009, but has only recently created his fursona with the help of Angrboda

Zhed is a musician; he has been playing the drums since 2004 and has written some of his own music. He is also a photographer and video editor.

Zhed is being brought to life by TwinkyArts fursuit builders. His suit is scheduled to be completed in the Summer of 2012.