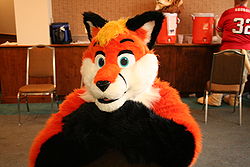 Zephyr Panthur (often nicknamed "the confuzzled kittiefox"; born September 18th, 1983) is a fursuiter who lives in Blanchard, Oklahoma, United States.[1] The similarity of his surname to the word "panther" is coincidental and does not reflect his species - his fursona is a European Lynx/Fennec Fox hybrid.

Zephyr joined the furry fandom at or around the age of fifteen. He discovered the fandom from school, when he was watching a documentary on Hitler, in which a lot of anthropomorphic artwork was displayed.[citation needed] After viewing this documentary, Zephyr did a yahoo search on the term "Anthropomorphic" and came across the website of Sabrina Online. From that point on Zephyr became an active lifestyler in the furry fandom.

Zephyr Panthur has two fursuits which depict his fursona. The first was built by P Pardus with some modifications by Zephyr himself, and debuted at Rocket City FurMeet 2006.[2] This fursuit has been retired and replaced by a new version built by Lacy which first appeared at Furry Weekend Atlanta 2008.[3]

Zephyr Panthur has attended several conventions, including Anthrocon, Furry Weekend Atlanta, Mephit Furmeet, Midwest Furfest, Oklacon, and Rocket City FurMeet. During Oklacon 2004, Zephyr was the staff member in charge of Web Scripting. He returned as a staff member for Oklacon 2006, when he was the Conbook Designer.

Zephyr has been working as a lighting and stage technician for Sub-level 03 since 2006.[4]